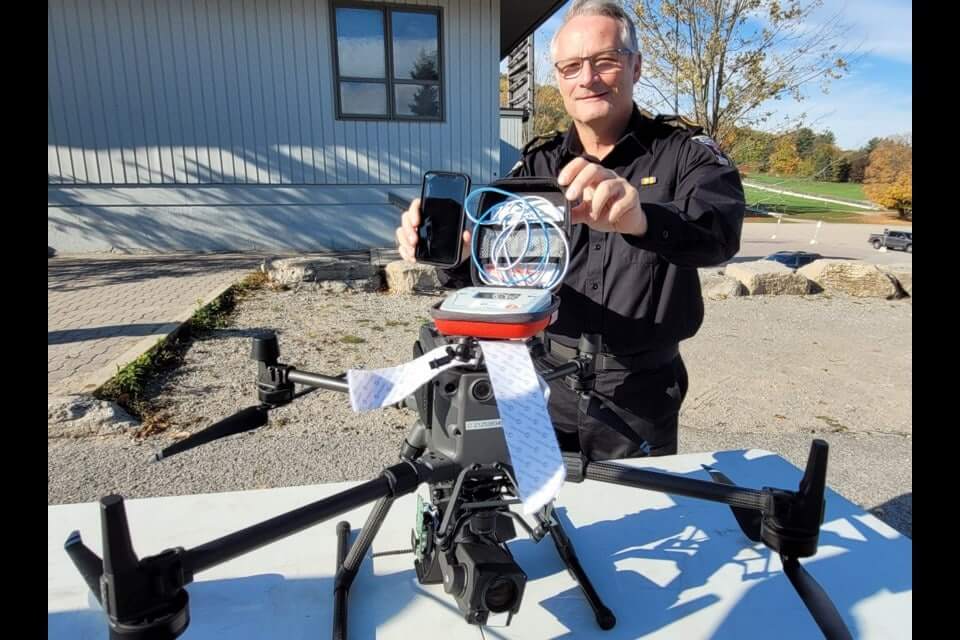 What saving lives could look like in the future was on full display this morning at Horseshoe Resort and it left local paramedics very impressed by the possibilities.

During Thursday’s drone demonstration at the Oro-Medonte Township resort, County of Simcoe Paramedics were able to see a near-immediate life-saving tool that has been in the works for months.

It took a little under seven minutes from the time the command was sent to the drone to the apparatus being delivered to its location.

“It’s important to the community in the way our geography is and how our residents are spread out,” he said. “We can’t be everywhere within the optimal time in a situation like a cardiac arrest, but the drone is a fantastic tool in the fight to save more lives.”

Drones could also be used to deliver medication such as EpiPens or naloxone in emergency situations.

County paramedic officials spoke to Volatus representatives to see if there was anything they could provide that could help in some of the situations they see while out on emergency calls.

“They took our information about things we see on the job and just ran with it,” Robert said. “They put together this demo today with our needs in mind and they also have a larger list of things we may encounter and they’re working on that right now.

“Getting a defibrillator to someone quicker means more lives saved, and that’s what we’re here for,” he added.

Today’s demonstration doesn’t mean local paramedics will be getting the technology soon, because there are still many regulations that need to be overcome.

While people see drones in the air on a regular basis, Volatus chief operating officer Rob Walker says there are still some obstacles with getting it into the hands of paramedics.

“There are a lot of regulatory things that have to happen before you’re going to see these as a commercial solution,” he said. “But they’re coming and Transport Canada is working diligently to make it happen.”

While some people may feel it’s easy to get a drone from one spot to another, Walker says there are lanes that need to be followed.

“We are mapping these lanes all the time and making sure they are below the 400-foot ceiling that drones are allowed. It is a complex system being studied and we have to account for everything from tree height, wires and buildings that may in the way,” he said.

“A rural setting is not as much of a problem, but for this to be really viable worldwide, we need to be able to go into the urban areas,” Walker added.

Volatus staff have been working on the project for close to six months, he said, and while today’s demonstration had many people watching closely, the drone activation and deployment is all computerized.

“No one touched a button” on the drone for this to happen today, said Walker. “A GPS location was uploaded into the drone and an operator basically hit ‘go’ from a control center. Today, six minutes and 41 seconds, the mission was complete. Very happy with today’s results.”

Robert says he understands there’s still some work to do be done on the regulatory front, but says he hopes it’s sooner than later that the equipment becomes readily available to paramedics.

“We now know the technology works and it is safe and reliable,” said the chief. “I understand, to a degree, the hesitancy to change regulations to have autonomous flying machines all over the sky. There are risks and issues, I get that. But there are also risks of not doing it. If we decide to not do it for 18 months, that’s a lot of lives lost.” 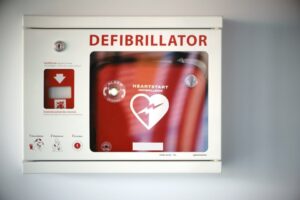